This solid safety rails his exciting new cruising catamaran from South Africa is loosely based on a Dean 5000 cat that a Hungarian cruiser/entrepreneur, Tamas Hamor, sailed around the world and managed in the charter trade with his wife, Sara. After Dean failed as a business, Hamor worked with ex-Dean designer Rudolf Jonker to develop a new 50ft world-girdling cat that incorporated all Hamor’s ideas and experience. The result is a well-thought-out cruising machine with a very long list of standard features.

The goal of Xquisite Yachts is to sell boats already equipped with everything needed for long-term live-aboard cruising and then provide owners with comprehensive lifetime service assistance. The boat and equipment conceived to realize that goal not only won the new X5 catamaran a SAIL Best Boats award for Best Large Multihull, but also an award for Best Systems.

The X5’s build regimen is fairly sophisticated for a production cruising cat. Quadriaxial stitched E-glass fabric is used in both the hull and deck laminate, with Divinycell PVC foam core in the hull and a balsa core in the deck. All structures are set in vacuum-infused epoxy vinylester resins, and structural bulkheads are Lloyds-grade marine plywood laminated by hand to both the hull and deck. Much of the interior furniture is also foam-cored to save weight.

The systems installations are particularly impressive. Standard equipment includes a Spectra watermaker, a Fischer Panda generator, a 52,000 BTU air-conditioning system, a 900-watt solar array and a washer/drier, to name just a few of the major items. All this and more is tied stern arch together via a digitally controlle Mastervolt C-Zone distributed power network fed by a large 750AH house battery bank. The brain and control module of the system is a preprogrammed iPad tablet that also comes standard with the boat. Systems operation and maintenance are controlled and monitored through the iPad, which sends all data back to the builder whenever it is connected to the Internet.

The boat’s most distinctive feature is a massive swooping stern arch, which supports a hard targa roof that ties into the cabinhouse coachroof. The total effect may seem aesthetically challenging to some, particularly when you factor in the bizarre chevrons of portlights at the roots of the arch, but the arch is, in fact, functional. Several working lines run inside it (and can be accessed through removable panels), it supports the overhead mainsheet traveler, and it incorporates an elegant overhead deck shower that will inject a lot of style into your cockpit showering routine.

In other particulars the deck is similarly very functional. A solid stainless steel handrail runs the length of the sidedecks opposite a long handhold on the coachroof, providing maximum security for those traveling to and from the bow. The coachroof is also home to a large recessed solar array, the panels of which can be canted in either direction to catch the sun at lower altitudes. Rain gutters in the roof lead into a pair of water fills, so you can easily top off your tanks for free.

I was particularly impressed with the helm station. This is slightly raised to port under an exceptionally well-designed helm bimini with a very solid frame, a fixed glass windshield, and a sliding fully-battened canvas roof that can be quickly raised and lowered. All working lines are led to the helm through belowdeck channels that are all accessible and are controlled with a pair of Harken 60 electric winches. These, in turn, are controlled with foot switches, so that your hands are always free to manage lines. The batteries of Spinlock rope clutches, meanwhile, are carefully arranged so that no two lines that need handling simultaneously must come to the same winch.

Living quarters, as you’d expect on any 50ft cruising cat, are palatial. Our test boat, hull #2, had the three-cabin owner’s layout, with one full-hull stateroom to starboard, which was itself considerably larger than the studio apartment I inhabited as a young man in Greenwich Village. The two guest cabins to port featured unique translucent ensuite heads with separate showers set inboard that enhanced rather than detracted from the overall ambience of space and light.

The galley is fantastic, with massive amounts of storage and counter space. A large island with its own countertop and drawers makes it easy to multitask, plus the appliances are top notch. There is an enormous front-loading Vitrifrigo fridge set off to starboard with two large freezer drawers beneath it. To port there’s a four-burner Smeg range and a separate Smeg oven. The galley opens out on to the cockpit, so as to more easily service the two tables there. The cockpit also comes equipped with its own separate fridge and drinks bar, standard, of course.

Our test-sail conditions on Chesapeake Bay were challenging for a dedicated cruising cat like this (i.e., less than 10 knots of breeze), but the X5 acquitted itself admirably. With a working suite of standard North Norlam laminated sails (a big squareheaded mainsail and a self-tacking blade jib) our speed was not inspiring—less than 3 knots at a 45-degree apparent wind angle in about 7 knots of apparent breeze. What was impressive, though, was that the boat tacked easily through this negligible wind with very little loss of speed. To heat things up a bit we unfurled the big screecher and hit a much more creditable speed of 5.2 knots at a 65 degree angle, again in just 7 knots of apparent wind. Unfortunately, we did not have a spinnaker aboard to test downwind speeds.

Thanks to the boat’s hydraulic steering, helm feel through all this was nonexistent, and I needed to keep a close eye on landmarks and the rudderangle indicator to steer a true course. I would expect both boatspeed and helm feel to increase a good bit in stronger conditions, but ultimately there’s no escaping the fact that this is a heavy, low-slung cruising cat with keels instead of boards. You don’t sail it for the sake of sailing it; you sail it to get somewhere faraway in comfort and style.

Our test boat ran twin 80hp Yanmar diesel engines turning a pair of threeblade MaxProps on saildrives. Spinning both engines at a cruise setting of 2,000 rpm in flat water we made 8.1 knots. With the hammer down on both throttles, our revolutions increased to 3,200 rpm and our speed ran up to 9.4 knots. Turning just one engine at 2,600 rpm, a likely long-distance cruise setting, we made 7.2 knots.

Maneuverability, as you’d expect on any cat with twin engines, was excellent. The MaxProps bit instantly when thrown into reverse, and it was very easy to turn and stop the boat, forwards and backwards, at both low and high speeds.

This is a boat that must command the attention of anyone looking for a large cat to live and cruise on long-term. It is particularly compelling if you consider the price point. For a price comparable with other mass-production cruising cats you get a well built, well-thought-out boat with everything you could possible want included. The builder’s long-term commitment to maintenance support should also be highly attractive to those with ambitious voyages in mind. 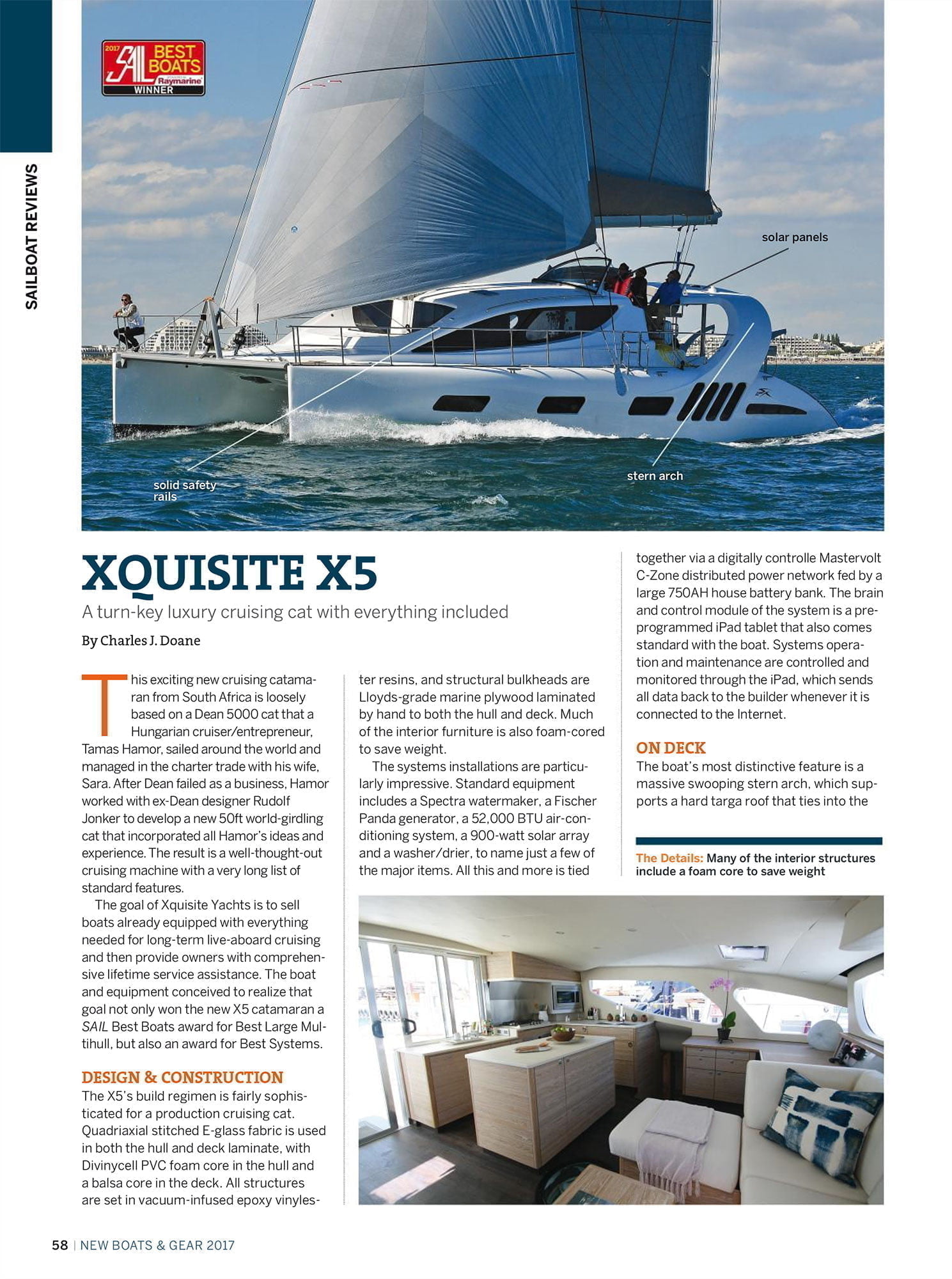 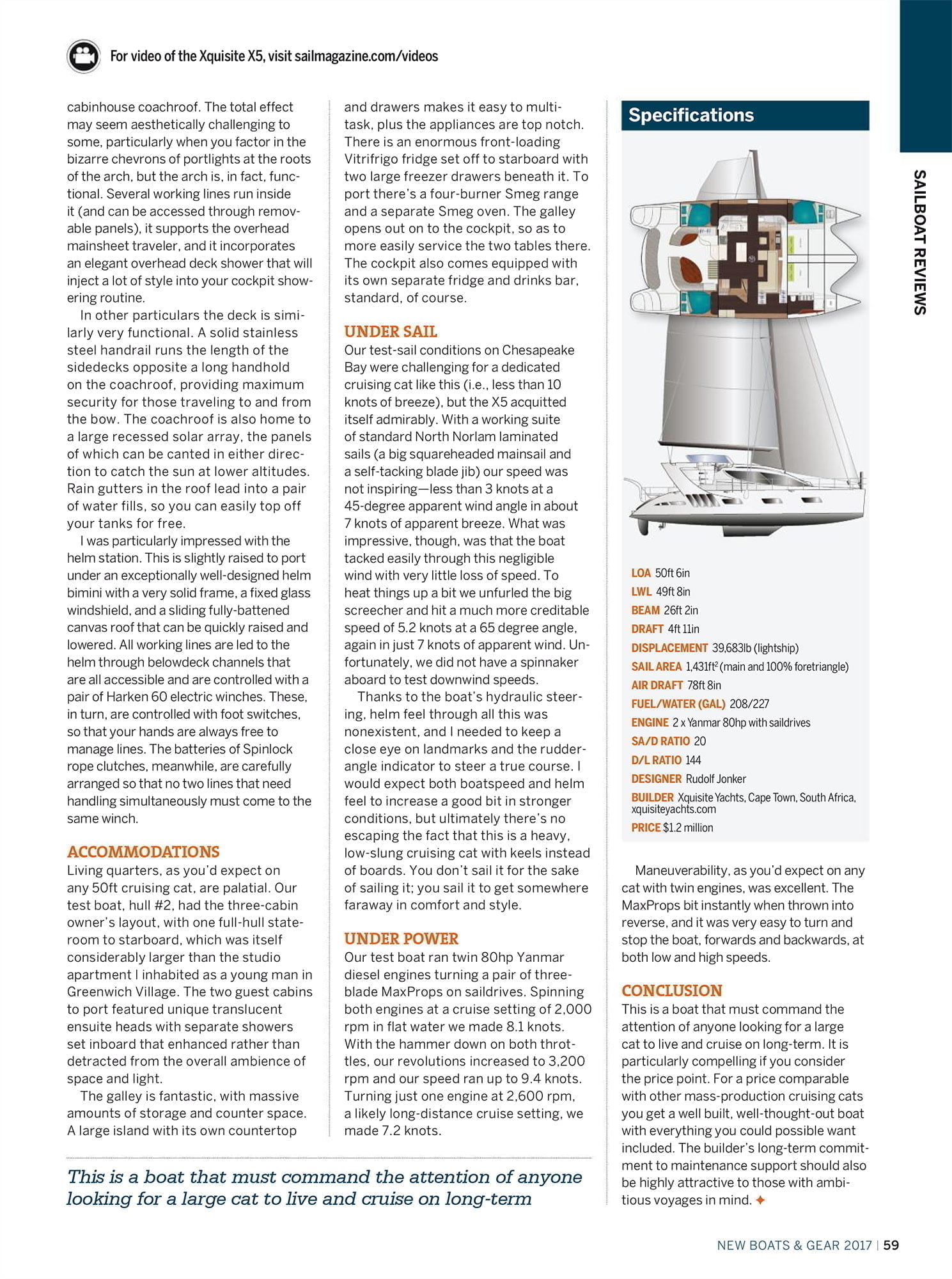