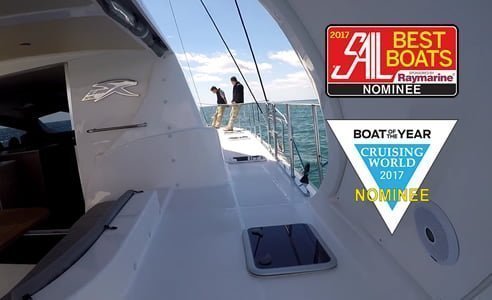 In 2010, the Dean 5000 became a big hit at the La Rochelle boat show, but then the actual launch of this model got bogged down with the various problems at the yard which eventually led to its demise.

Phoenix Marine, a major South African manufacturer (in the composites fabrication and shipyard sector) bought the rights to the plans and asked architect Rudolf Jonker to take up the project and design a completely new boat within the existing lines: the Xquisite X5. We were able to get a first look and try her out in some great weather conditions.

Tamas Hamor, the commercial director and developer for the X5, is a professional skipper: a seasoned and a well-experienced sailor, he is passionate about the techniques and the development of boats. Owner of a Dean 5000 which he has had in charter for several years, he has put a lot into the specs and quality control meaning that a top-quality multihull goes on the market.

The quality of build and of equipment used reduces any potential problems and makes resolving them easier thanks to closely-monitored technical maintenance. As a day-to-day user (short-handed, with his wife) of a big catamaran, he is easily able to envisage things from the point of view of a future owner. The approach is original and genuine, the result convincing.

Rudolf Jonker was formerly a naval architect at Dean Catamarans. He has his own design team at Phoenix Marine and has redesigned a large part of the original boat.

TO FIND OUT MORE, DOWNLOAD THE X5 CATAMARAN BOAT REVIEW